Alcohol can enter the body in various ways. In Medical and scientificpurposes, alcohol can be injected intravenously. It can be injected to certain areas or given by enema. Small amound can enter the the body by inhalation and absoption through the lungs. Minute amounts get into the system when large areas of the skin are rubbed with alcohol. However, major intake is through drinking. When taken without dilution, distlled bevereges give burning sensation and warmth in the mouth and gullets. 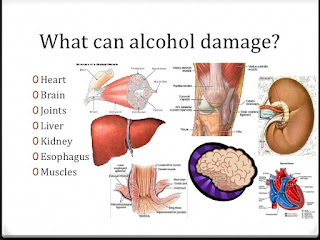 Alcohol, to a limited extent, gives energy when it is oxidized (broken down) to acetaldehyde by an enzyme called dehydrogenase. Then it is further broken down to carbondioxide and water. Energy is released during this process. In the case of ordinary foods, the rate of oxidation is adjusted to the needs of the body, but with alcohol, this adjustment does not occur. The warmth felt on the body is a loss of heat from the body itself at a more rapid rate than normal and not from the alcohol. The tottal mass of functional tissue of the liver is directly related to the rate of alcohol coversion. Human body, under normal conditions, can burn up about 1gr. of pure alcohol per hour per 10 kg body weight.

Effects of alcohol on the body and brain.

Alcohol is a depressant that acts mainly on brain. Alcohol reaches the brain by way of the blood stream. The speed with which the alcohol enters the blood stream depends on the size of the drinker, the stregth of the drink, and the presence or absence of food in the stomach(Resnick and Resnick 1979).

Many people believe that alcohol is stimulant but really it is a depressant, which slows down that activities. The slowing effects become obvious when the alcohol level in the blood stream reaches as low as 0,1%, though he feels stimulated in the beginning. By that time the drinkers walk, balance, coordination, speech, sight, hearing and judgement are seriously affected. 4 to 6 ounces of whisky or 4 to 6 pints of beer can cause this condition.

Presence of food in the stomach can slow down the absorption of alcohol into the blood stream. Diluting a drink with soda or champagne increases the rate of alcoholic

There are many types of alcoholic beverages. Toddy or palm wine is the exudate tapped from palm inflorescences in tropics. Palms like oil palm, date palm, Cariota and coconut tree yield this type of drink,which contains about 1 to 3 % alcohol. Wine is made from grape or other fruits and berries which has an alcohol contant of 12 to 14 %. Sherry wine prepared by adding alcohol to wine. Beers and ales are prepared by fermenting a broth made from maited grains.The starch in the grain is converted to sugar and yeast acts upon it. Hopes are usually added to give the beverage a characteristic bitter taste.

Beers contain 3 to 6 % alcohol. U.S beers contain 4,5%.  Spirits are made by distilling fermented mixtures of fruits, three barks and other ingredients. Various kinds of whisky are distilled from fermentd mixtures of cereals or potatoes. They usually contain 40 to 50 % of alcohol. 50 % mixture is called 100 proof, and 40% is named 80 proof. Gin is 90 to 100 proof which is a distilled neutral spirit. Vodka is distilled from rye, barley or potato and has no flovor, which 40 to 50 % alcohol. Rum is made from molasses or a by-product of suger cane with alcohol content up to 90 %. Spirit of ethyl alcohol and rubbing alcohol are 95 %.

Alcohol is milder than other drugs available in the market. Alcohol is depressant but grugs are both absorption. The ways in which the body handles alcohol that has been absorbed into the blood stream and distributed through fluids and tissues can be summarized in the follwing manner. About two to ten percent of the absorbed alcohol is excreted relatively unchanged, from the lungs.This odor is distinct in the breath of a drunken person.Traffic enforcement officialls use breath test for detection of alcohol. There is also some excretion in the urine, feces, sweat and tears. A part of the remaining 90% is oxidised to form carbondioxide and water with release of energy. Excess urine production is due to this breakdown process. Major breakdown process occurs in liver, which in turn is controlled by the capability of livertissues.The unused alcohol enters the bloodstream which increases the alcohol concentration in blood. 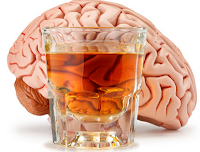 Major actions and effects that takeplace in various parts of the body, as a result of the intake of alcohol, is shown in the figure attached (adapted from Time,1987). Alcohol can trigger bleedings in stomach and intestine and has been linked to cancer. The liver suffers more than any other organ. As soon as alcohol enters the bloodstream, the liver begins the proces of elimination. It can eliminate half ounce of alcohol - in one hour. Alcohol can displace key nutrients causing mainutrition. Excess calories are stored in the liver as fat. Eventually the liver cells die and degenerate the organ resulting in cirrhosis. Its ability to degrade alcohol produces tiny amounts of a morphine like compound in the brain. The level of certain chemical mediators such as serotonin controls the drunk-hangover cycle. It is also believed that alcoholism can cause changes in the receptors in the brain that bind to trangullizers and opiates.

Estimates of alcoholism rates differ amoung countries and period all over the world. Due to variety of reasons, a general survey of alcoholics throughout nations is not practicable. The cirrhosis rate, an yellowisioness resulting from inflamed liver cells, was found to be inadiquate and unreliable.

It is difficult to interview every member of the population. Further, a combained use of alcohol and other drugs are often observed. Not only are more youngsters trying alcoholic beverages but large members are drinking heavily and consistently. Teenage drinking and drug abuse have risen to a very high level. An earlier report from New York city state that 10 % of the Junior and Senior High School students are already or potential alcoholics (Cohen, 1983). He further states that intoxicated youngsters are apt to become involved in malicious mischief in schools, parks, and dwellings,and engage in armed robbery. Recent survey on children of Alcoholics (COAs) brought an alarming report that their chances of becoming alcoholics are greater than the children of non-alocholics.

Alcoholism a constant intake of alcohol, is a widespread habit amoung the people of all nations. Psychiatrists have determined three criteria to define and diagnose alcoholism:  psychological symptoms, psychological difficulties and behavioral problems that disrupt social or work life. Many Gallup polls indicate that one in four families reported a problem with liquor at home, the highest reported rate since 1950 and twice the 1974 rate (The Time, 1987). Seaveral studies indicate that children begin drinking earlier than ever before and adolescents are easily vulnerable.

for up-to-dates and FW. link Send Article, comments and write ups to :
DHRUWADEEPTI ONLINE LITERATURE.
Published from Heidelberg, Germany,  in accordance with the European charter on freedom of opinion and press.
DISCLAIMER: Articles published in this online magazine are exclusively the views of the authors.
Neither the editor nor the publisher are responsible or liable for the contents, objectives or opinions of the articles in any form."
E-mail: dhruwadeeptionline@gmail.com