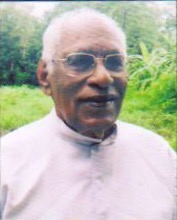 The Sanjivan foundation of Patna, now renamed as “Prabhat Prakashan” a Centre for the promotion of Hindi Catholic literature in Central and North India has judged Fr. George Pallivathukal of the diocese of Jabalpur, M.P., India to be the best Catholic writer in Hindi language of the year 2015 and confired on him the prestigious Kerubim Berna Sahu Award for Hindi literature.  The Award is co-sponsored by the Arch diocese of Patna, Jesuit Province of Patna and the Prabhat Prakashan.  The award consists of a citation and Rs. Ten Thousand.
The citation highlights the various contributions Fr. George has made to the catechetical apostolate especially his various books for catechesis and the effective training programmes he used to conduct for many years for catechists and school teachers of the dioceses of Madhya Pradesh and Chhattisgarh.  Fr. George’s recent book “Catechism of the Catholic Church summarized and translated for adults and adolescents is acclaimed as the best book for faith education in the Hindi belt of the country.  Fr. George has been earlier honored by the Indian Christian Writers Forum a joint association of Catholics and Protestants.

Besides being a writer, Fr. George is also a good speaker.  He has visited all the dioceses of M.P. and Chhattisgarh and many dioceses of the North addressing the laity regarding their role in the Church and asking them to take their rightful place in the church.

Fr. Pallivathukal is originally from St. Mary’s Parsih, Elangulam under the Kanjirapally diocese.  Fr. George joined the Jabalpur diocese as a missionary and is working there.  He had his seminary studies in St. Albert’s College, Ranchi, Jharkhand where he started his study in Hindi and Sanskrit as optional subjects.  Father had his Catechetical training in Bangalore and later his higher studies in Catechetics in the East Asian Pastoral Institute of Manila Philippines, affiliated to the Atheneo De Manila University.  Father has his specialization in “the theological updating of the laity”.  He says that the laity form more than 99% of the church and if they are animated and motivated and they take their rightful place in the church, they form a solid Indian Church.

Fr. George laments that most of the church’s documents and teachings remain as research materials for scholars and those who are doing doctorates.  They do not reach the grass root level and hence ordinary people have no access to them and they remain unaware of the teachings of the church.  They are satisfied with their “penny” catechism.  Fr. George’s attempt is to make the church teachings available to the general public in the vernacular in a language that is adapted to their level of understanding.  Most of Fr. George’s writings are in Hindi.   So far he has written 20 books, seventeen in Hindi and three in English.  His writings are simple and easily understood by a person of average knowledge of Hindi./-