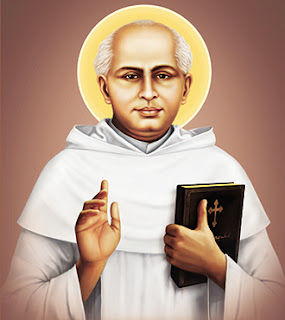 
A Prototype of Heaven on Earth


In the epilogue of his letter to the people of God in his Church he wrote:
This is my testament to you who are my children in two ways,
as members belonging to my family and as my spiritual children ...
In order to remember this facts always...
copy this down and preserve this in your homes. Elsewhere he wrote :
" The father of the family should conscientiously observe this rule of life.
Above all read this code of family rules on every Sunday and on the first day of every month in the presence of all members of the house"


The native country, the erstwhile Travancore State, of St. Chavara, where the Syrian Christian community had its home, was under the double political dispensation, namely the Hindu Raja and British Resident from the Anglican Church which was not at all willing to recognize the possible leadership the Syrian Church could have given in the much needed field of social reforms.

From this historical perspective it is understandable why Chavara did not get the prominenence and attention he deserved amoung the pioneer social reformers of the time. It is the view of some that the social vision and social action of Chavara did not have a broader outlook, that is, it was limitted to meeting the needs only of the Syrian catholic community in Kerala. Although this criticismis valid to some extent, this does not, in any way, lessen the authenticity and depth of his social vision. A through analysis of his social action will reveal that his social vision was broad enough to include every member of the society of his time.

As a matter of fact, the so- called "limited social vision" of St. Chavara had its root, as we have already referred to, in historical rather than in personal factors. The same historical factors have forced other social reformers also, in the 19th and early 20th centuries, to limit the scope of their social uplimit programmes to the needs of their own community. In Kerala which was riddled with numerous castes and communities and and was beset with the problems resulting from inter- religious and inter- cast tensions, It was practically impossible for any one to overcome the barriers of cast and community and be completely open to all without any special regard to one's own community in his social actions.

The Hindu ruling class was not prepared to recognize different communities as having equal social status and equal social rights. The Hindu Kings of Travancore had dedicated their country to Shri. Padamanabha and ruled it only as the steward or slave of the Lord. These Kings regarded the whole country as their own property. The other ruling power of the time in Kerala was the protestant group. Naturally, there was no ruling power in Kerala at that time to extend its patronage to the Syrian Catholics. This capricious combination of the Hindu protestant ruling power had its adverse effects on the Syrian Catholics as it made life and worship hard for them.

Often they were denied the right to establish Churches at locations of their choice, or to educate their children in the manner and institutions of their choice. Thus, for instance, when the founding Fathers of the CMI congregation finally located a suitable piece of property for a monastery and a Church near Kumaranalloor, they were forced to abandon it owing to the staunch opposition from the local Dewaswam authorities. We read in the Chronicle of Chavara that in order to establish a monastery at Mannanam the founding Fathers had to appeal to the Diwan of Travancore to get permission from the Thahasildar of the locality. The Christians of that time could live and act only in accordance with the dictates of the caste Hindus who were not only the rulers of the country but also the occupants of all the key positions in Government and society.

Obviously, it was impossible for anyone from any community to work for the welfare of all, overcoming the barriers of caste and community created by the caste Hindus. It is true that St. Chavara's efforts for social emancipation and social uplift were mostly confined to serving his own Syrian Christian community. In the field of social work and social action St.Chavara could only be a product of his times. In this essay, however, we make an attempt to show how deeply spiritual and egalitarian he was in his vision with regard to the family, especially to women, children, labourers and one's neighbours.

His Parting Message to his People.

St. Chavara wrote a circular letter to each member of his congrigation and to the faithful of his Church as his advice and farewell greetings, and as his last testament to them. The opening salutation of his letter to the congregation is very touching: "I your servant, brother Kuriakose Elias, address my dear Rev. Brothers, priests, Priests, my dear children and the Novices and the lay brothers, swearing my fidelity to Christ and giving you my advice and farewell greetings".

The central vision of the circular letter becomes crystal clear when he touches  on the blond of charity and obedience: " my dear brethren let the vicars of each of our monasteries foster real charity amoung themselves and maintain a true bond. However numerous the monasteries are, all must be like the members of one family, children born to, nursed and brought up by the same mother. Never let this love weakens, but let it grow stronger from day to day.

He continues: The significant mark of a true religius is total negation of their self-will and perfect obedience..Realize this and make a strenuous effort...We owe the same obedience also to other subordinates and finally to one another. He who practices perfect obedience in all these spheres will enjoy heavenly peace already in this monastery, which is a mini-heaven. This is certain.

As a true monastery is a 'mini-heaven' on earth a true Christian family is also heaven on earth. Chavara wrote: " In this valley of tears, torn by pains and sufferings the greatest consolation is to live in a family where there is love, peace, charity and order. In the same way the greatest sorrow for a man would be to live in a family where there is no peace, no order, and where the members live independent of each other without caring for eternal salvation."

In the epilogue of his letter to the people of God in his Church he wrote: This is my testament to you who are my children in two ways, as members belonging to my family and as my spiritual children ...In order to remember this facts always... copy this down and preserve this in your homes. Elsewhere he wrote :" The father of the family should conscientiously observe this rule of life. Above all read this code of family rules on every Sunday and on the first day of every month in the presence of all members of the house".
The style of the epistle reminds us of the farewell discourse of some biblical personalities like Moses( Dt.33), David (2 Sam), Paul (Acts.20) and even Jesus (Jn 13-16), which manifested the depth of their love to their children and followers. //-

ധൃവദീപ്തി  ഓണ്‍ലൈൻ
Dhruwadeepti.blogspot.de
for up-to-dates and FW. link Send Article,
comments and write ups to :
DHRUWADEEPTI ONLINE LITERATURE.
Published from Heidelberg,
Germany,
in accordance with the European charter on freedom of opinion and press.
DISCLAIMER:
Articles published in this online magazine are exclusively the views of the authors.
Neither the editor nor the publisher are responsible or liable for the contents,
objectives or opinions of the articles in any form."
Eingestellt von dhruwadeepti um 16:54