Plunging into the Mission
The First Encounter : Fr. George Pallivathukal


A week after I took charge as an assistant priest in Junwani Mission centre, I decided to visit some of the neighbouring villages where there was a christian presence. My first visit was to Dumartola, a village about 10 km away from Junwani. I took one of our school teachers, Mr.Anandi Das Pannaria as a companion and guide. Anandi was my own student, I taught him in class VIII when I was a regent in Junwani. When I went back to the Ranchi Seminary to pursue my Theology studies Anandi Das completed his Higher Secondary studies and joined our school as a teacher. He was very efficient and committed teacher and an active member of the church. 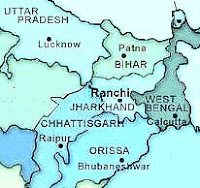 Mr. Anandi and I started of our journey on foot taking our lunch Packets, a bottle of drinking water and two bamboo sticks with us. Bamboo stick is a constant companion of the missionaries visiting villages on foot. The stick helps as a support for walking, crossing rivers and is a protectionagainst wild animals while passing through thick forests. To reach Dumartola we had to cross the Burner river and walk through the reserve forests. The jungle was known for wild animals.

After three hours of tedious walk we reached our destination. My intention was to get acquainted with the villagers whom I was sent to serve. Dumartola had about 40 catholic and catechumen families. During the period of catechumenate the candidates for full membership in the church are taught prayers and the main tenets of our faith. During this period they are also tested regarding their faith as well as their intention to join our faith.

Our visit to this particular village was unanounced and therefore it brought a great surprise and at the same time a lot of relief to the Christians of the place. As soon as we reached the village the news about our arrival went around and the catechist and a few catholic leaders came and met us. They said that we were brought to the village by their Guardian Angels to protect them. They reported to me that the Thanedar (Station Officer) of Mawai police station was camping in this house of the village head usually known as the Mukadam of the village. He had collected our catholics in the courtyard of the Mukadam and was threatening our people. Now I had to face this man. I remembered the words of Jesus when he forewarned us that such occations will come in our pastoral life and we are not to be firghtend or terrified because he would be with us on such moments and the Holy Spirit will put into our mouth what we have to speak (M.10,12).

Without wasting any time Mr. Pannaria and I walked to the Mukadam's house and as soon as our people saw us,they got up, folded their hands and said "Jai Yesu", a greeting that the enemies of the church hate to hear. As I reached the house where the police Inspector was camping I was given a Khatia (a mini cot) to sit down. The police officer was stunned and was angrily staring at me. I greeted him and started talking to him.He said that he was new in the place and this was his first visit to the Dumartola village. I asked him why he collected all our christians in the courtyard of the Mukadam. He said that he received a complaint against them and therefore he came to make an enquiry. I asked him to give me a copy of the complaint or at least show me the paper. He had no papers with him. He said that the complaint was oral. I got a chance to tell the crowd present there and the Police officer, that we are all citizens of this country and every citizen is free to follow and propagate the religion of his / her choice and nobody could object to it.

I told the officer that I have the right to talk about my religion even infront of his police and he could take action on me only if I disturb the peace in the area and not for preaching my religion. I told the people present that harassing people who follow a different religion other than theirs is punishable by law. The non christians in the village were preventing our christians from drawing water from the village well and grazing cattle in their common ground. I told our people to make a written complaint to the police Inspector if any one in the village harassed them because the police are there to protect everybody. I told the crowd that we do not force anybody to become a christian, but becoming a christian on your own free will is not a crime.

From that day onwards the police officer and I became friends and whenever I visited the villages around his police station I used to go to his office and pay him a courtesy visit and have acup of tea with him. After this Dumartola confrontation our christians of that village had a pieceful time.

On thing I learned from the above mentioned encounter was that when we go to do His work we are not alone. It is not we who speak, but the lordspeaks through us. His spirit puts words into our mouths when we have to speak (Mt. 10, 17). "Our enemy becomes powerless in front of our courage". This was a great lesson for me and I have experienced it all through my priestly life, whenever I had to deal with officers and court cases.

I was not familiar with mission tour of villages. So I accompanied Fr. Terrence on a five days tour. The village we were visiting was about 25 km away from Junwani and the whole distance was covered on foot. Usually we spend one day and a night in a Village. On account of the strong sentiments of caste feelings in villages, we used to take a cook along for the preparation of our meals while we were on tour. As per the custom of the place the cook took care to collect provisions from the centre according to the specified number of the days we went out visiting villages.

The catechist met us in the village we were accomodated in one of the houses prearranged for our stay. After a short rest we set out visiting families. Besides the catholic and catechumen families, we made it a point to visit the houses of the village head, the village kotvars, panchayat members etc.even if they were against us. When we visit these village functionaries they were usually polite and offer us a seat and a cup of tea. It is important that we keep good relations with these people so that their harassment of our people will be less. They feel honored when we visit them in their houses.

After the evening meal, the christians gathered in the house where we were residing. First we had the Rosary and during the Rosary the baptized adults made their confessions. After the prayers the time was spent in conversing with the people. They enquired about the priest in charge, about the school and the boarding and news about other areas of our mission. We had exchange of news from both sides. This is the appropreate time we come to know about what happens in their villages. The session sometimes lasts till midnight. Our periodic visits to the villages give our people much courage to withstand the opposition from non-christians.

In the morning we had plenty of time for our prayers, beakfast etc. because people were not in a hurry to assemble for the Mass.To answer the nature's calls we had to go to the open-air toilets either in the jungle or in the fields or in the nearby stream. When ever I reached a village I tried to findout where the nearest stream was where I could go for my needs in the morning. Going to a stream was more convienient and comfortable than going to the fields as we were away from the eyes of the people. It took quite some time for me to get used to this way of morning wash and bath.

People, after finishing all their household works, came to the place where we were staying. Once the people assembled the catechist started the morning prayers which consisted in the recitation of all the prayers and the basic catechisam which they had learned by heart. Meanwhile we priests sat for confession to minister to those who had not come for confession the previous night. During the Mass instead of preaching a homily our sermon was a session of catechesis on sacraments. We do not get any other chance to feed the people with ongoing faith formation to deepen their faith. Faith formation doesnot stop with the reception of Baptism.

After the mass we priests and the people spend some time in recreation. The men folk smoked a Beedi and the women and the children tasted some sweets. This was and is an effective way of building up relationships between the priests and the people and the people among themselves. After dismissing the people we along with the catechist continued visiting those families which were not visited the previous evening. After lunch in the afternoon we proceeded to the next destination, the village where we were supposed to halt. The discription above gives the reader an idea of what happens in our mission tour. Once I had picked up the skils of mission tour, I was spending almost fifteen to twenty days in a month visiting villages.

Fr. Terrence and myself returned to the centre after five days of village visit. The distance that we had to cover on the last day of our tour was about 25 km. That was a very tiring and continuous walk.And yet I was thrilled to experience the mission tour. What I had experienced was similar to what I had heard and learned from the mission magazine. "Preshitha Keralam" and from experienced missionaries who used to address us when I was young and was studying in the high school. So I was prepared to face hardships in mission work.

Pray for our brethren who are oppressed for their faith! INDIA ranks No. 31 on the 2013 World Watch List, a ranking of the 50 countries where living as a Christian is most difficult. The list is created annually by Open Doors International, a world wide ministry to Christians who live under pressure because of their faith.

Most Christians live openly without pressure in India, but anti-conversion laws are on the books of five states, and in pockets of the country nationalist Hindus routinely confront Christians with accusations that they are attempting to forcibly convert Hindus to Christianity. Here is a sampling of incidents during January and February.
Madhya Pradesh

ധൃവദീപ്തി  ഓണ്‍ലൈൻ
Dhruwadeepti.blogspot.de
for up-to-dates and FW. link Send Article,
comments and write ups to :
DHRUWADEEPTI ONLINE LITERATURE.
Published from Heidelberg,
Germany,
in accordance with the European charter on freedom of opinion and press.
DISCLAIMER:
Articles published in this online magazine are exclusively the views of the authors.
Neither the editor nor the publisher are responsible or liable for the contents,
objectives or opinions of the articles in any form."
Eingestellt von dhruwadeepti um 21:28