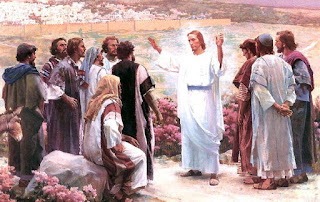 
Easter greetings begin to ring across the globe as people wish one another “Happy Easter!” But many may be skeptical about its relevance in today’s world where news of distressing events are splashed in the media almost daily from different parts of the world. The violence and bloodshed taking place incessantly in the Middle East is the focal point today. An Indian Catholic priest has been kidnapped by the ISIS and there is as yet no clue to what has become of him.

Militant groups belonging to ISIS, Al Qaida or Boko Haram continue to wreck havoc on populations fleeing from their onslaught. The Syrian refugee crisis keeps mounting in Europe as thousands continue to knock at doors in the countries of Europe seeking refuge from the misery and death in their home country. Violent clashes based on caste, religion or political affiliations are reported frequently from different parts of India. The curse of terrorism can strike at will anywhere and leave behind pain beyond telling. It is the same old story of man’s cruelty to man that keeps recurring from times immemorial. Christians commemorate on Good Friday the archetype of violence of the fiercest kind meted out to Jesus Christ two millennia ago. Sadly no radical change of any sort has come over humanity as a whole, even after all the developments of science and technology in the recent decades. Intolerance in all forms keeps manifesting itself at all spheres of human life and activity.

In this scenario of pain and anxiety, Easter comes every year with its message of peace and wellbeing to all humankind: “Peace be with you!”. It is the greatest Good News of all times that has been proclaimed in the world. But it came as most unexpected even for his closest followers who had been told by Christ himself about his rising from the dead. The cruelty they had witnessed being inflicted on the Master was too numbing for their minds to leave any room for hope. Hence the Master Himself had to come to wake them out of their hopelessness and despair. “Was it not necessary that the Christ should suffer all this and thus enter into his glory?” (Lk.24:26). He repeats the same to the disciples gathered together in the upper room, adding that “Repentance and forgiveness in his name is to be proclaimed to all the nations, beginning from Jerusalem.” (Lk.24:47). Easter tells us all in plain terms that life can begin again and that there is no end of the road for anyone. No one needs to change to know God‘s love. Suffice to know that love and change will happen.

It is human inability to come to terms with one’s brokenness that is responsible for all the violence that is witnessed in today’s world. One fails to go any deeper than one’s feelings, ideas, notions and beliefs and expects everyone to fall in line with them absolutely. It is the failure to realize that a human person is far more than all these above. He or she is the image of God and the core of his or her being is God Himself. But to discover that divinity hidden within, one must get beyond the din that goes on in the mind which is under the spell of impressions from the past and pressures from all directions. To know the presence of the Risen Lord, one must allow reality to be what it is and encounter it with the power of love and forgiveness.

The core message of Easter is the assurance of love for all unconditionally. “Nothing can separate us from the love of Christ” as St. Paul says in his letter to the Romans. The commentary on Paul’s letter to the Romans Ch.8: 18-39 made by Eugene Peterson in his book, ‘the message: the New Testament in contemporary English’ is most relevant here:

I don’t think there is any comparison between the present hard times and the coming good times. This created world itself can hardly wait for what is coming next. Everything in creation is being more or less held back now. God reins it in until both creation and all the creatures are ready and can be released at the same moment. Meanwhile the joyful anticipation deepens.

All around us we observe a pregnant creation. The difficult times of pain throughout the world are simply birth pangs. We are also feeling the birth pangs. That is why waiting does not diminish us, any more than waiting diminishes a pregnant mother. We are enlarged in the waiting. But the longer we wait, the larger we become, and the more joyful our expectancy. [This is what I call “negativity capability,” or the rubber band pulled back which increases the momentum forward.]

So, what do you think? With God on our side like this, how can we lose? If God didn’t hesitate to put everything on the line for us, embracing our condition and exposing [the Godself] to the worst by sending [God’s] own Son, is there anything else [God] wouldn’t gladly and freely do for us? . . . Do you think anyone is going to be able to drive a wedge between us and Christ’s love for us? There is no way! Not trouble, not hard times, not hatred, not hunger, not homelessness, not bullying threats, not backstabbing. . . . None of this fazes us because Jesus loves us. I’m absolutely convinced that nothing—nothing living or dead, angelic or demonic, today or tomorrow, high or low, thinkable or unthinkable—absolutely nothing can get between us and God’s love because of the way that Jesus our Master has embraced us.” (1)

Easter is the message of reconciliation and peace that has been sealed forever. But this realization must begin within our own being first and foremost. We need to find ourselves at home and loved even in all our brokenness and sinfulness. There is no situation in life that cannot be restored, rectified or changed if we have recourse to the divine power within us which is the power of love. The entire universe is inter-connected and inter-dependent. Galaxies and heavenly bodies have been spinning in space for billions of years subject to the law of gravity. 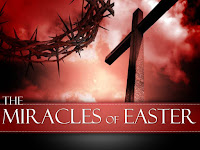 It is only the human being who entered into space and time just yesterday who dares to cross this barrier and break into the space of the other. It climaxed in the crucifixion of Christ. But the words of forgiveness were uttered from the cross: “Father, forgive them, for they do not know what they are doing” (Lk.23:34). Do we really understand what we do to one another in the name of God or religion or any ideology for that matter? Intolerance in today’s world has surpassed all limits and we are witnessing blood-curdling instances of people who take law into their own hands dealing out death and destruction on their path to anyone different from them. Little do He has broken the power of death and sin forever and for everyone. We only need to enter into they realize that it goes totally counter to the essence of our nature as human beings.

His bandwagon and choose to live the risen life refusing to heed the voices of the ego that keeps striving to assert its identity. Life will constantly dance between good times and bad, success and failure, praise and blame. But nothing is to be taken as absolute. Everything passes and truth will shine out in course of time to reveal to us what reality actually is. If we have faith to accept reality from the hands of God believing that “God works for the good of those who love him” (Rom.8:28) we shall find ourselves being empowered by God to share in the death and resurrection of Christ. That was what St. Paul wanted all his life: “I want to know him and to experience the power of his resurrection and share in his sufferings and become like him in his death so that I may attain the resurrection from the dead” (Philippians 3:10). The meditative words of the Franciscan priest, Richard Rohr from the United States, seem most suitable to quote here:

It takes all of us a long time to move from power to weakness, from glib certitude to vulnerability, from meritocracy to the ocean of grace. Strangely enough, this is especially true for people raised in religion. In Paul’s letters, he consistently idealizes not power but powerlessness, not strength but weakness, not success but the cross. It’s as if he’s saying, “I glory when I fail and suffer because now I get to be like Jesus—the naked loser—who turned any notion of God on its head.” Now the losers can win, which is just about everybody.
The revelation of the death and resurrection of Jesus forever redefines what success and winning mean, and it is not what any of us wanted or expected. On the cross, God is revealed as vulnerability itself (the Latin word vulnus means wound). The path to holiness is so different than any of us would have wished or imagined; and yet after the fact, we will all recognize that it was our littleness and wrongness that kept the door to union and love permanently wedged open every day of our life. In fact, there is no way to close it. 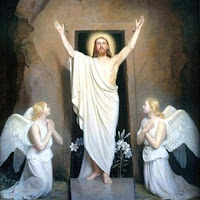 Easter is meaningful to any man or woman who acknowledges the glory of divinity within him or her. One does not need to belong to a particular religious group to experience this. One has only to rid oneself of the conditionings under which one has been living and begin to operate from a different energy center. It is that core within us that sustains us in being. It can never be the mind that is constantly subject to change in understanding, feelings and emotions. The one who taps on the power of Easter has truly begun to live. Gerard Manley Hopkins once said: “Let Him Easter in us.” He meant to say that we ought to allow the Risen Lord to manifest Himself through our deeds of love and compassion. This is the miracle of Easter that should become part of our lives and not miracles that catch the eye of people and draw their attention on to us.