The Triple Ministry in Mandla District 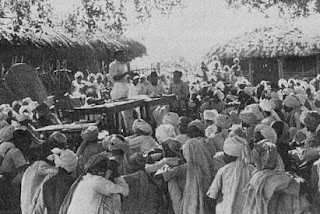 " Mandla is a tribal district situated in the east-central part of Madhaya Pradesh. The district lies almost entirely in the catchment of river Narmada & its tributaries. A district with a glorious history, Mandla comprises of numerous rivers and endowed with rich forests. The world's famous Tiger Sanctuary, Kanha National Park located in the district, is one of the hottest targets for both the domestic as well as foreign tourists.

The extreme length of the district is about 133 Kms. from north to south and extreme breadth is 182 Kms from east to west. It covers a total area of 8771 Sq.Km. and consists a total population of 779414.
There are 9 blocks 6 Tehsils and 1247 villages in the district. With the promulgation of Madhya Pradesh reorganisation of district has been bifurcated into the Mandla and Dindori districts. The Dindori, Shahpura Tahsils and Mehandwani development block formed Dindori district while rest of the area existed in Mandla District." 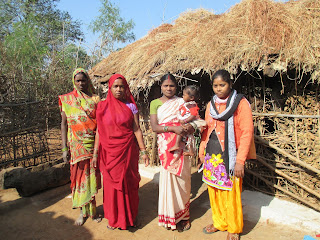 Kusumlata Bhavedi (extreme right), 25, of Bhatgaon village in Mandla district of Madhya Pradesh is an exceptional Gond tribal woman who is spreading awareness on issues like health and nutrition, education and rights to enable the local community to fight poverty and hunger. (Credit: Shuriah Niazi\WFS)

Jesus was a person of compassion and love. He was compassionate towards those who were suffering. He used to cure the sick, wipe their tears and alleviate the pains and sufferings of any one who came to him for help. He would ask them to believe that he was able to do this service for them. Thousands believed in Jesus. He told his disciples to continue his healing ministry after he was gone (Mk,16,18) and he empowered them with the giftes of the Holy Spirit to lay hands on the sick and heal them(1Cor,12,9).

Our tribals were animists and ancestor worshippers. They were victims of sorcerersand which doctors who were known as 'Gunias' in this district. People were made to believe that some one in their family got sick or some calamity occured to them because their ancestors were displeased with them. In order get well they had to placate the angry ancestors and for this the people were made to pay a huge amount of money to the Gunias for sorcery. The Gunias were the beneficiaries of this superstition.

The missionaries projected Jesus to the people as a great healer. We opened dispensaries in all our mission centres, sisters were running the dispensaries and treating patients.The priests, sisters and catechists prayed over the sick and treated them with medicines. The Lord accompanied them with his healing touch. This ministry brought thousands of people to believe in Jesus and they became his followers. People had great faith in holy water, besides the Sacraments. They used to keep the holy water in their homes and used it along with prayer when some one was sick at home. Even those who were possessed with evil spirits used to get cured by prayer and the use of the Holy Water. Even non christians used to take Holy water from the christians when someone was sick in their families. Healing ministry was the most effective means of Evangelization. The Gunias (Sorcerers) were the biggest enemies of the chritians, because our healing ministry was affecting their income.

One of our Dutch missionaries Fr. John Van Schinjdel built a referrel hospital at the district head quarters of mandla. He was the priest in charge of a small mission centre called Dhanwahi from 1941 onwards. When he was there hundreds of villagers died of a cholera epidemic because of lack of medical assistance. He was moved by this tragic incident and decided to return to Holand, study medicine and come back to serve the people here. He did his M.D. and came back to Mandla with two more Dutch doctors in 1959 and built a hospital with 200 beds in the year 1960 especially to serve the poor tribals of this district. Today katra hospital is the best hospital in the district and hundreds of patients are being treated every day in this health centre.

No one can preach to an empty stomach. Jesus envisaged a society free from all that hurts man, including hunger and poverty. God is a God who listens to the cry of His people. He has fed them miraculously with manna from heaven and water from dry rock (Ex.16& 17). Through prophet Isaiah God teaches us that the kind of fast that He likes is when we share what we have with the poor, feeding the hungry, clothing the naked and sheltering the homeless. God will bless such a person in abundance 1s.58:1-9). The natural resources that God has created are meant for all God's children.

Gandhiji says that there are enough of resources to satisfy the need of everyone, but not the greed of anyone. A model of this we find in the christian community of the first century(acts,Chapters 2,4). They were of one heart and mind. There were no beggars among them because whatever they had they shared with everyone according to each one's need. This was a perfect model of socialistic mode of life! The christians of the first century were a believing, praying, serving, or sharing and witnessing community. This community is called "the church".

Jesus Himself is the norm and model for serving and sharing. Jesus did not accumilate anything for Himself. He only gave to the extent that he broke his own body and shed his own blood and shared them with his friends. Blood is life according to the teaching of the Jews. By shedding his blood for others he was sharing his own life with them. And he instructed his followers, "You also do as I have done", give until it hurts you, give even your life for the sake of others. Following the command of the master the church has served the society till today.

Jabalpur diocese did not have any fund or material resources to help our people on a large scale. The Dutch were severely affected by world war II and they had not recovered from its impact when our dutch Missionaries came here. Hence they could not get any help from Holland. Yet the Dutch and the pioneer Indian Missionaries kept up their services to the tribal villages with the limited resources they would get from their homes or their friends. The Bishop would pay every priest Rs.90.per month as his food allowence and Rs.75 per month as Mass stipend. With this amount the priest had to manage his food, the food expenses of the boarders as well as the maintenance of the house. Besides this, he had to supply free books and stationary to the students. Education was not the priority of the parents and in most cases the priests had to persuade the parents to send their children to the school as though their education was the need of the priest. Hence no boarding fees could be expected from the parents of the boarders.

To our relief in the mid fifties the diocese started getting some help from the " Catholic Relief Services (CRS) in the form of milk powder and wheat. In the initial years, the CRS help was meant for free distribution. Our boardings greatly benefited from this supply. Thousands of poor villagers who were on the verge of starvation due to continuous drought and crop failiure also benefited from this supply. By the year 1960 the CRS help was better organized and made more beneficial to the villagers. Instead of distributing the grains freely they were given as wages for improvement of their own agricultural fields, for building of approach roads in villages, digging of drinking water wells etc. This way thousand of acres of land was turned into better paddy and wheat fields.

In 1962 Caritas India started their countrywide relief programmes. With the help of Caritas India more drinking water as well as irrigation wells were dug, irrigation tanks were built and watershed-programmes were started. With these facilities our farmers who had to depend only on seasonal rains started getting better yield from their farms. Government agencies came much later to help the villagers to improve their life standard. Today several mission centres have their co-operative societies and banks managed by the people themselves. They are free from the clutches of money lenders and businessmen.

Our diocesan Social Welfare Centre guides and co-ordinates the above mentioned programmes. The centre conducts social and legal awarenessprogrammes, as well as programmes to teach the people about the benefits of Panchayati Raj, their rights as citizens and the protection of environment. Eleven years ago our Social Welfare Centre received the prestiegious Priyadarshini National Award for environmental protection.

Thus through their Educational, Health, and Social Ministry the christian missionaries have been able to enter into the lives of the tribals of Mandla District and their presence brought a lot of blessings over the people of this district.//-