Dhruwadeepti // Journey of a Missionary Priest // Finance for the Building of the Centre // Fr. George Pallivathukal

// Finance for the Building of the Centre // 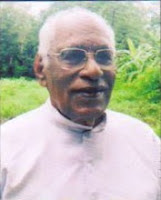 I discussed with Bishop Theophane about raising funds for the construction of the centre. Bishop said that we will try to get the fund for the purpose by ourselves and we will not trouble the other Bishops asking the money. By this time Bishop Theophane had built up an image amoung the funding agencies in Europe and India that he was honest and sincere in his dealings and that he would use the fund only for the projects for which it was given. There are occasions when he was ready to return the amount sanctioned for a project which he could not execute. Hence I was sure that his signature would be honoured by the funding agencies.

We had Fr. Lameres O'Praem, the mission procurator of the Norbertines in Holland, to help us to get funds. Fr. Lamers was a missionary in Jabalpur for many years. Due to his illness he had to go back to Holland but his heart was still in India and he was ready to render any help. I used to write application for funds, get the signature of the Bishop and send the papers to Fr. Lamers. He did the rest of the work for us. We only asked for the minimum from funding agencies.

Plan and constuction of buildings.

I did not aproach any engineer, architect or contractor. I knew that 25% of the fund I recieved for the construction would be eaten up by them. I had an inspiration and guide in the neighborhood in the person of Fr. Dr. J. Van Schinjdel. He had built the entire Katra hospital complex without the help of an engineer or contractor. I also wanted of buildings he constructed for the hospital, simple but strong with tiled roofs. I approached Fr. Van Schinjdel and he promised me all possible assistance, Fr. Charles Lobo and myself made the plans for the buildings, showed it to Fr. Van Schinjdel and he approved our plans. Our plan was to make a main building at a convenient place in the copound, a hostel for those who come to the centre for shortterm courses, a residence for priests, a convent building, a grihini school and 32 family quarters for catechists and their families.

In October 1979 I had gone to Bangalore for a week and when I came back to my pleasant surprice the entire lay out for building in the compound was done. Fr. Charles called  an experienced mason, Ganesh, and both of them togeher did the lay out according to the plan we had made earlier.

1979- 80 was a famine year. The villagers had no work and no food. We called the people of Tindini to come and work at our building site. We employed everyone who came asking for work. We gave the digging of the foundation on cantact basis. The whole compound was filled with people digging the foundation, collecting stones and hard murrum soil to fill the foundation.

before we started the masonry work, we dug a well which gave plenty of water and built a water tank from where water could reach every part of the building site. We contacted a truck owner who supplied us with bricks, sand and other building materials in keeping with the pace of the work. His trucks were plying daya and night bringing building materials. Fr. Van Schinjdel was coming every evening eo see the progress of the work. We employed Ganesh as the head mason for the construction work and he brought fifteen more masons. We wanted to finish the construction work fast because we were determined to begin the training programme for catechists in mid 1980. Braiving the heat and the cold and the rain Fr. Charlie and myself were at the building site from morning till evening supervising the work. We were staying in Binjhia and coming to the site every morning. Fr. Van Schinjdel had introduced me to several hardware, electrical and other types of shops from where we could buy materials for the building. The Bishop had given us a pick up tocollect materials for the construction work. Two to three times a week I would drive the pick up to Jabalpur to collect materials needed for the building.

Work in Tindini is going too fast.

In the meantime a well intentioned person reported to the Bishop that the building work in Tindni was going too fast and there is danger to the strength of the building and therefore the work should be stopped immediately. If the construction work was weak and liable to collapse then that would be a colosall loss and waste of money. As soon as the Bishop got this complaint he came to Mandla to investigate the truith about it. However Fr. Van Schinjdel came to our defence. He said "I have a lot of experience in contruction work. I come to the site every day and asses the work. I don't find any danger to the strenght of the building." I have full faith in these two boys ( He used to call us boys). Do not discourage them. We should appreciate and encourage them for the efforts they are making."With the intervention of Fr. van Schinjdel the Bishop was satisfied and was continued with the work.

When the construction of the structure of buildings was almost finished, Fr. Charles Lobo was transfered. Had it not been for the constant monitoring of Fr. Lobo the building would not have come up so fast. More than half of time I was out. Fr. Peter's joining in the Tindini team was timely. He was a practical man in his own way although he could be rather expensive. He had an aesthetic sense. He planned the fittings, furnishing and beautifying the buildings. When everything was completed,

people who visited Tindini felt that they were in a resort. For this credit goes to Fr. Charles and Fr. Edappilly. The place itself had its natural beauty. The centre was situated on the bank of river Narmada on one side, overlooking a mountain full of greenery on the other side. Bordering our compound we had the National Highway.

Although only ten kilometers from the heart of Mandla town on the National Highway, Tindini did did not have electricity. We got the villagers together and got the panchayat to pass a resolution and got the panchayat to apply for electricity for the village. We got all the formalities done including the recommendation of the Collector in less than 24 hours. After submitting the application in the ditrict Electricity office, I went with a copy of the application to Mr. James, who was still the Chairman of the Madhypradesh Electricity Board of Jabalpur. To our luck the executive Engineer of the MPEB was Morris Collaghan, a member of the cathedral parish, Jabalpur. He told me that the work would done within a week. Fr. Peter was determined that the inauguration of electricity in Tendini should be done on the 23rd April 1980., the feast day of St. George. The villagers assembled in the panchayat Bhavan and in their presence I pressed the button and the street lights from one end of the village to the other lit up and the whole village looked bright.

The villagers were fully aware that had it not been for the efforts we made and the influence we had in Mandla and Jabapur they would not have got electricity so fast. They accepted that the presence of the missionaries brought blesin gs for them. They were spared from starvation by giving them work during that famine year and now without any effort on their side they got electricity. We had very good relationship with the villagers.

Raid by the Forest department.

As the masons were buisy with briks and mortar, twelve carpenters were buisy at wood work, preparing doors, windows, roofs and furniture etc. They too were doing intensive work. We were buying wood partly from a timber merchant and partly from a local contractor. The tribels had permission to cut and sell their trees and the local contractors used to buy this wood and sell to the needy for a profit. They had license to do that. This was much cheaper than buying wood from big timber merchants. Katra hospital was buying huge amount of timber from local contractors. One evening a consignment of wood was brought for me and I had not yet received the bill for that. The next morning the forest department came to our campus and confiscated the entire stock of wood that we had collected and took two truck-load of teak wood to the forest godown.

Who is my brother ?

I had all the bills for the timber I had bought earlier except for the consignment I received the previous evening. The contractor from whom I bought the wood couldnot give me receipt because the forest department had confiscated his bill book. I just needed receipts for that much of wood.The contractor was in connivance with the forest officials. They wanted to frighten me and get some money out of me. If I did not produce the receipts, the forest officials could prosecute me for robbing wood from the forest. I deceided to go to the court to fight out the case against the forest department. I went to the Karta hospital and asked the priests there for some receipts to file in the court along with whatever I had with me. To my shock they flatly refused to give me any receipt. I was disappointed and hurt. I told them that by giving me a few receipts from the bundles of bills they had in their possesion, they would not lose anything and at the same time if I did not file receipts for the entire stock of would that has been confiscated by the department, I might have to go to jail. " You can go to Jail, we do not care" was the reply. Bishop was in Europe. Fr. Van Schijdel by that timr had moved to a place called Motinala to build a new hospital there.

I came back from Katra disappointed at seeing the arrogant attitude of my brother priests. I felt run down . A Hindu friend of mine, Mr. O. P. Vedi hearing about the raid carried out by the forest department in our premises came to see me. I told him that I had decided to approach the court to get my timber back, but I needed some more receipts. He took me to a timber merchant who was his friend and obtained suffitient official receipts for the entire wood I had possessed. Both of us went to the court, employed a good lawyer and filed a case against the forest department. After hearing the argument and going though the evidence the magistrate orderd the immediate release of the wood and within two days the entire wood was back in my premises. I asked myself "who is my brother?" Mr. Vedi, my good- samaritan friend and a Hindu, stood bail for me in the court and stood with me until the case was judged in my favour.//-

ധൃവദീപ്തി ഓണ്‍ലൈൻ
https://dhruwadeepti.blogspot.com
for up-to-dates and FW. link Send Article, comments and write ups to :
DHRUWADEEPTI ONLINE LITERATURE.
Published from Heidelberg, Germany,  in accordance with the European charter on freedom of opinion and press.
DISCLAIMER:  Articles published in this online magazine are exclusively the views of the authors.
Neither the editor nor the publisher are responsible or liable for the contents,  objectives or opinions of the articles in any form."
FACE BOOK:  GEORGE Kuttikattu    MOB. + oo49 170 5957371
Posted by George Kuttikattu
*************************************************
Eingestellt von dhruwadeepti um 09:51