A Symbol of Sanctity within Our Reach : //

The spiritual means for growing in love and devotion to God is prayer. It is a way of approaching God. In Chavara's aproach to God we can distinguish two predominant sentiments, namely, fear and filial love. His fear of God takes its origin from his sense of his unworthiness. He takes care of this sentiment first by strengthening his conviction of God's love and mercy for all men, and secondly by deepening his faith in the communion of saints. It shows itself in him in two ways, namely, his belief that saints being concious of the seriousness of sin will be of help to sinners in their struggle to holiness; and his belief that the spiritual riches they have gainedmake them worthy to be our mediators with God. As he begins his meditation he address a prayer to St.Theresa of Avila.

" You enter the chamber of your beloved bridgroom and compel him to turn his merciful eyes on me".  He continues, " Here inthis room set apart for contemplation, there sits enthroned Jesus Christ, the Lord of Mercy. To his right sits " his mother the mediatrix of all graces and to his left our patron St. Joseph. And there are also present there Mary of Magdalena, Mary of Egypt and Margaret of Cartona, all with the burden of their repentance and restitution. I make them all mine and dare to come up to you, my father". (III.P.16).

It is not fear that dominates in this prayer, but the sentiment of filial love. He calls God 'appa, Father, more than thirty times in his short composition, Meditational Conversation. His attitude in prayer can be compared to that of Moses on Mount Sinai; he was fearful, at the sight of Yahwe, but he returned from mountain with joy, peace and radiance (Cf. III,p, 26). This could be perhaps understood in terms of the "tremendum et fascinosum" (awe inspiring and fascinating) of Rudolf Otto in his work 'The Idea of Holy'.

The way to God is Christ. One of the central aspects of Chavara's prayer in his intense desire to see Christ. He tries to see Jesus in all the moments of his earthly life, from the moment of conception to his glorious resurrection. St Theresa of Avila in her Interior Castle states that the essential aspect of mystical prayer in the sixth mansion is sorrow for sins and faith in the humanity of Christ. Meditating on the birth, life, passion and death of Christ, Chavara grew in his sense of unworthiness and entered into more deep forms of prayer. 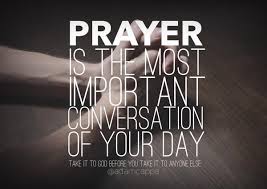 Prayer for Chavara is a conversation with God. Friends, even though they donot know each other's language, communicate with each other Such is the case with men in prayer (Cf.III, 1 pp. 14-15). The awareness of the presence of God is the essence of prayer. In the third letter to sisters he writes: "You swear your loyality to God: Let every movement of your nerves, and veins, the twinkling of your eye, your very breathing, the cooing of the birds etc; make all these petitions and offerings first, and then offer all these in union with the works of our Lord to God. That wipes out your sins. And we gain plenty of virtues as our riches (IV, p,110).