A Message for Christmas 2015

The Year 2015 is about to pass off into history. It has been a year that saw humanity drawing closer together in solidarity in the wake of terrible acts of mindless terrorism and violence perpetrated in different parts of the world. Gruesome acts have been carried out against humanity in the name of ideologies that defy all ethics and humanity, driving thousands out of their homes and homelands. Calamities such as the earthquake in Nepal and the devastating flood that engulfed the city of Chennai and the adjoining districts for days have left scars on large segments of the population. It is in the aftermath of all this that we are about to celebrate Christmas which may apparently seem quite out of context for many. However, on a deeper look at what the first Christmas was for Mary and Joseph, we realize that Christmas has a message for every man and woman in every clime or circumstance. And the message came through the angels: “I proclaim you a message of great joy for all the people.

Today a Savior has been born to you…you will find a baby wrapped in swaddling clothes and lying in a manger” (Luke 2:11-12). God has entered humanity in its history and in its consciousness. Christmas is not just a mythical story that has no basis in history. Rather it is the historical entry of God as man into the world at a definite time and place. “The Word became flesh; he pitched his tent among us and we have seen his glory, the glory of the only Son coming from the Father, full of grace and truth” (John 1: 14). Jesus was not a human being in whom God entered but he was God who took on human nature so that we all, invested with a human nature, may find Christmas relevant to our personal history. 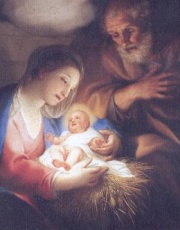 Christmas is the climax of the love story of God with man. As Pope Francis reiterates about the Christmas event: “It is the tenderness of God who looks upon us with eyes full of love and who accepts our poverty; a God who is in love with our smallness.” Beginning his life in the manger and ending it on the cross, Jesus embraces the entire span of a human person’s life in its poverty, simplicity and sinfulness. Christmas then is a time to allow ourselves to be loved by God more than about our loving him. Cardinal Avery Dulles from U.S. has some pregnant words that describe what Christmas is all about: “Christmas does not give us a ladder to climb out of the human condition, it gives us a drill to burrow into the heart of everything that is and thus to find it shimmering with divinity.” The good news of Christmas is not that God is going to sweep away as if by magic all troubles from our life that are more often caused by our greed and selfishness. But rather it tells of a God of love who is personally involved in everything that happens everywhere and anywhere.

Do we not see him so strongly present whenever sorrow or tragedy strikes us at close quarters? We saw it in the refugee crisis that affected Europe that transformed the hearts of thousands in providing generous hospitality to strangers. We saw it in Nepal and Chennai when help came from far and near providing food and shelter to thousands bereft of their dear ones and home. Christmas invites us to look out for this God shimmering in the ordinariness of our life with its ups and downs. It tells us of the second aspect of the story of Christmas which is its mystical content. Through the incarnation God was not only entering the history of human kind but also its inner consciousness. As Meister Eckhart maintained “In the person of God the Son, as Jesus, the carpenter of Nazareth, God entered into the Ground of the Soul – that inner Sanctum common to all human beings in all periods of history – and has remained there ever since.” He was entering into human nature in its essence which is at the core of every human being, divested of all peculiarities unique to each person. It is here that we are at our best and manifest it when we are free from selfish considerations.

A man was dying of cancer in his home. He needed to be helped by someone to rise or get out of bed by holding him tight as he had no strength left in his limbs. A couple of days before he died he was helped out by his wife. She had her arms tight all around him as she was laying him down to bed. He then turned to his four teenage children and said: “Kids, it could not be any better than this.” Well, ask yourself what it is in your life that is sparkling and shining and gleaming because of the presence of God. Even the worst of situations can offer hope when God’s presence is recognized in it. Christmas should then remind us all of this overwhelming truth that God’s name is indeed Emmanuel, God with us. There is nothing in human life, no crime or sin or calamity that should make someone despair or give up hope. Look for that hidden loving presence and the joy and peace of Christmas will ever shine on your face.