We cannot force our views on anybody else.We have to work tactfully and persevere patiently for social change. Only education can change the mentality of the people. This takes a long time. Even today caste system is very strong even among educated Indians. /   Fr. G. Pallivathukal.

A missionary needs to have a sense of history if he wants to be successful because he is supposed to build on the foundation laid by his predecessors. Hence in the evenings when we were relaxing after supper I ussed to ask Fr. Paymans how he started the mission work and how he came to Junwani. Then he would start his story from the beginning.When he started speaking about the mission he would forget himself and sometimes would go on talking till after midnight. I would sit besides him and listen to him like those Israeli boys who would listen to their elders about the story of their life in Egipt and their liberation from slavery. Following is what I learned from this pioneer missionary.

Jabalpur was a visiting station of Nagpur diocese. When the soldiers of the Madras regiment from Kamptee shifted to Jabalpur,M.S.F.S (Missionaries of St.Francis De Sales) fathers accompanied them as military chaplains. There were Christians among the soldiers. Nainpur hosted the Divisional Headquarters of South Eastern (S.N.Rly) Railway. The MSFS fathers used to come to Nainpur also to cater to the religious needs of Christains working in the Railways.

In 1933 the Holy See gave an Independent mission terrritory consisting of 13 districts with Headquarters at Jabalpur to the Dutch Norbertines. Norbertines were at time working in south India.Some places belonging to the Allahabad diocese like Bina, Sager, Satna, Rewa etc. were among the thirteen civil districts given to the Norbertines. Norbertines replaced the MSFS fathers. and was brought under the "Propaganda Fide" for Mission administration and Mgr. Conrad Dubbelman O'Praem was appointed Prefect Apostolic.

Fr. Otto Paymans came to India in the year 1933 and soon he was appointed as parish priest of Nainpur. He was not satisfied with just looking after the pastoral needs of his parishioners who were few in number. He was a zealous missionary. He wanted to do more and go further. Five kilometers from Nainpur was Dhanora where a group of French Salesian Missionary Sisters of Mary Immculate (SMMI) had a convent. Fr. Paymans was also chaplain to these sisters. The sisters had done extensive tour of Mandala district in their bullock cart and they knew much about the people of this district.

Mandla is a tribal district situated in the east-central part of Madhaya Pradesh. The district lies almost entirely in the catchment of river Narmada & its tributaries. A district with a glorious history, Mandla comprises of numerous rivers and endowed with rich forests. The world's famous Tiger Sanctuary, Kanha National Park located in the district, is one of the hottest targets for both the domestic as well as foreign tourists. 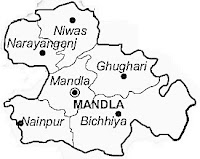 The extreme length of the district is about 133 Kms. from north to south and extreme breadth is 182 Kms from east to west. It covers a total area of 8771 Sq.Km. and consists a total population of 779414.
There are 9 blocks 6 Tehsils and 1247 villages in the district. With the promulgation of Madhya Pradesh reorganisation of district has been bifurcated into the Mandla and Dindori districts. The Dindori, Shahpura Tahsils and Mehandwani development block formed Dindori district while rest of the area existed in Mandla District.

Mandla was a tribal district inhabited by the gonds and the Baigas. Some minor tribes and castes were also seen amoung them. Cities were mostly inhabited by caste Hindus who had come from other states. There were lots of Muslims also in the cities. They were all traders. Money was in the hands of Hindu banias. Gonds were farmers. Gonds were a great strength in the district. They had their own Gond rulers both male and female. Rani Durgawathi was a powerful queen who fought with the British. Gond kings had their palaces in Ramnagar near Mandala and Madanmahal in Jabalpur. Baigas were more primitive than the other tribes. Since Fr. Paymans was interested in the evangelization of the district, the sisters shared with him all the information and experience they had about the district and the people and guided him in his attempt.

The failure of the sisters.

Sisters were the pioneers of evangelization work in this area. They were the Landlords of Dhanora village. The villagers were their farm labourers. It seems that they had baptized all the villagers wchich created a lot of resentment among the people. They had an orphanage for a short while. In order to to teach orphan boys some trade for their lovelihoodsisters started carpendary and Leather works. Sisters had made arrangements with the cobblers of the neighboring villages to supply them with cured animal skin. People in the village and the boys in the boarding revolted. Unlike Europe India is a highly caste concious country. People of defferent castes use each other for their benifit but they have no inter caste social communication.

Cobblers, locally known as chamars, were considered and categorized as outcastes. This attitude is unjust and inhuman according to our christian beliefs and understanding. However we cannot force our views on anybody else.We have to work tactfully and persevere patiently for social change. Only education can change the mentality of the people. This takes a long time. Even today caste system is very strong even among educated Indians.

The elders in Dhanora village still remember the double standard practiced by the sisters. It was not edifying at all. No wonder, God did not bless the efforts of these sisters in Dhanora. Those who do not practice chritain charity in their own homes have no right to preach the Good News. This was a great lesson for Fr.Paymans.

Mistakes of the Protestants.

English Protestant missionaries had come to Mandla district decades before the Dutch missionaries. The protestants came with the English rulers. Those days the collector, Superintendent of Police and other high officials of the district were all British. The Protestant missionaries had converted a lot of tribels into their faith. But they did a great blunder. They forced the newly-baptized christains to eat cow meat. These people were not in the habit of eating cow meat. Although the tribals were not Hindus, they also held cow as a sacred animal. Many of the neophites were unhappy over this incedent. Some of them vomited after eating the meat because they were eating it for the first time in their lives. and that too unwillingly. Second blunder the missionaries did was that after baptism they forced the christains into inter-caste marriages. Most of the new christians resisted and left the religion. This too was a great lesson for Fr. Paymans.

Christians converted by the British Protestants were known as Isais, those who follow Isa, Jesus. People of the place looked at the Isais with contempt because in their eyes Isais were people who destroyed their culture culture and spoiled their women. So Fr. Paymans projected a defferent identity of himself. He said that he was not an Isai, but a Roman Catholic. He taught his converts to call themselves catholics. He told them by becoming a catholic a Gond doesnot cease to be a Gond, a tribal continues to be a tribel. So he allowed them to follow their own customs, which were not sinful. He told them to keep away from idolatry and polygamy and such evil practices. This remeinded me of the council of Jarusalem recorded in Acts Ch.15. /-

Visit  Dhruwadeepti.blogspot.com for up-to-dates and FW. link
Send Article, comments and write ups to : george.kuttikattu@t-online.de
DHRUWADEEPTI ONLINE LITERATURE.
Published from Heidelberg, Germany,
in accordance with the European charter on freedom of opinion and press. DISCLAIMER: Articles published in this online magazine are exclusively the views of the authors. Neither the editor nor the publisher are responsible or liable for the contents, objectives or opinions of the articles in any form."
E-mail: dhruwadeeptionline@gmail.com