ധ്രുവദീപ്തി : Christianity // Chavara - A Multidimensional Saint // A Meditative Reflection on the Testament- Dr.Thomas Kadankavil CM I

A Meditative Reflection on the Testament-

His writings, especially the letters are mainly addressed to three catagories of People, namely religious, priests and families. These instructions were mainly aimed at Building up their communities as Family of God. Since the members of the congregation consider the holy words of their founder as Testament, those sayings directly related to religious and priestly life are collected together as his will given to the posterity to Relish in their daily life and thus to rejuvanate Always the Mission of the congregation. What follows is a freelance writer's running commentary on all the articles included in the Testament.

2. Structural Information About the Text.

All the text given here are Translation from the first Malayalam Edition of the complete works of Chavara published in 1981- 1982 in 4 voliumes. The only norm is selecting these text seems to be that they express the mind and vison of Chavara on religious and priestly life very touchingly and vividly.
Thext can be grouped under the following sub-titles:

3). Beauty of Vocation to Religious life. 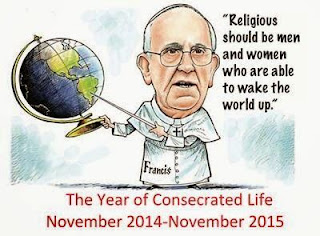 Chavara understood vocation to priestly and religious life as two distict Gifts God bestows on his specially  chosen Souls. The first vocation he recieved was to priestly life, that too was at the tender age of Eleven and the vocation to religious life grew in him through the Long years of prayerful waiting. This naturely suggests that the members of his congregation have to mark out the distinctive characteristics of priestly and religious spirituality and they have to be beutifully blended in their lives. The year of priest celebrated in 2013 with St. John Vianny as Patron brought to our  attention the constitutive dimensions of the spirituality of a diocesan priest. In the present context when we turn our Attention to the double vocation of Chavara the distinguishing Elements of religious spirituality also has be specially examined.

Because of the special pastoral situation during the last six decades in the Church in Kerala members of the congregation were greatly involved in the patrol work done by the diocesan clergy, even converting the monastery chapels into parish churches. Today several members, especially the youngesters have begun to give more prominence to priestly identity than to the religious because of the increased Involvement of the congregation in the pastoral work. This call for a fresh understanding of the mind of Chavara with regard to these two vacations. This fact is that the priestly identity brings members closer to the People and it gives them more social recoginition and emotional satisfaction, with the consequence that it is given prime importance at the expence of religious life Chavara envisaged.

A meditative reading of the reflections of Chavara on religious vocation and life would certainly serve as a corrective for the lopsided Vision of the Christian vocations. It would remind one not to  forget the greatness of his religious identity due to the prominence given to priestly identity.

Submission to Gods will:
1. Loving community:

In the article on Submission to God's will, besides referring to the historical fact that the congregation grew in the Carmalite Tradition, the author firmly affirms that it so happened " because God willed it so" and not because man planned it thus. The Opening article of the CMI constitutions is a restatement of what Chavara wrote in here. The constitutions declare: " God, in his loving Providence has called us, Carmalites of Mary Immaculate to a community of love in the church"(#1).

The answer Chavara gave to the question why the congregation developed in the Carmalite Tradition was that it was so willed by God. Next he refers to ist early human planning. " The founding Fathers Thomas Palackal and Thomas Porukara had sought and arranged for this being a Dominican order. That is why we started unprocedentedly wearing the white casock and took other steps.(Vol.4,1990, pp,70,71).

Chavara artributesthe change in the initial plan to the loving intervention of the beloved Mother, due to frailty of her Children whom she took into her Special care. He affirms his firm faith in this truith in the following words: " I am sure of this as I am sure of this as paper" on which he was writing.

3. A true Monk and Obedience:

Religious obedience is regarded as the anchor and fountainhead of all virtues. Hence he says that to become true Monks(religious) one has to make complete surrender of self and practice obedience.If one has that he is a true religious.

The ideal proposed for this Goal is the practicing of the virtue of obedienceto perfection. The mode of practicing it has to be as if one had no eyes and ears. Once the Tradition of practicing the virtue of blind obedience was recommended in the monastic spirituality nd now it is being interpreted obeying the directive of one's superiors for the larger good of the community even when one does not see the reasonableness of the precept of the superior over his own reasoning.

"We owe the same obedience to the other sub-superiors and finally to one another". Chavara here seem to be referring to what St.Paul wrote to the Corinthians: " All of you may proclaim God's message, one by one, so that everyone may learn and be encouraged . The spirit of of Prophet should be obedient to the prophets, because God is not God of disorder but Peace"(1Cor.14:31-33) Chavara concludes his reflection on obedience with the following words: He who practice perfect obedience in all These spheres will enjoy heavenly Peace in this monastery itself".