Bishop Leobard was on a visit to Junwani. One morning he said, "George, come let us go visiting some villages" We chose Dumertola where I had the encounter with the police officer. Bishop had heard about the incedent and he was anxious to visit those people. We started walking after morning Mass and breakfast. I had sent a person ahead to inform the villagers that Bishop would be visiting their village.

Dumertola is about 10 km away from Junwani. After crossing the river Burner, we have to cut across the thick forest of Mawai mountain range to reach the place.By the time we reached the village, the news had gone arround the huge crowd gathered to welcome the Bishop. He interacted with the villagers very freely. One great quality in Bishop Leobard was that he relate to anybody at any level. He was of international fame and at the same time he could be at home with an illiterate villager. The villagers were very happy that their Bishop Swamy came to visit them and enquired about their wellbeing. Bishop spoke to them, encouraging them to be firm in their new faith and he assured them that the church would alwas be with them. Bishop's visit brought a lot of joy and moral courage to the faithful of that village.

When Bishop Dubbelman understood that Bishop Leobard was ready to take over the Diocese as the chief Shepherd, he sent his resignation to the Pope in January 1966 and vacated his seat for his successor. Leobard was consecrated as Bishop with right of succession. Hence the Pope confirmed him as the head of the diocese of Jabapur. Accommodation for Bishop Dubbelman was arranged in the nearby St. Augustian's Seminary. Bishop Dubbelman refused the invitation of the Abbot of the Norbertine Abby of Berne, Holand, to come back and retire in the Abby. Nor did he want to go the Norbertine Priory of Jamtara to spend the rest of his life there. St. Joseph's sisters of Champery were ready to to look after him after his retirement. But he preferred to stay in the diocese which he had built up and which was very much in his heart. He stayed in St.Augustine's until he died. He loved the diocese in letter and in spirit. His principle was once a religious priest becomes a Bishop, he is not under the jurisdiction of the religious order, but, he was wedded to the diocese. It is an undivided and unconditional relationship with full mutual loyality. This relationship remains until death.

A fall in the river Burner.


More than half of the villages arround Junwani which was used to visit were beyond the river Burner. To reach some villages like Kewar, Singenpuri etc., we had to cross the river twice. One day I was on a visit to Kewar. I did the first crossing of the river and walked about 15 kms to come to the second crossing. It was the beginning of the rainy season and the soil along the bank of the river was slippery. as I put my first step forward to climb down the river I slipped and went down about 30 feet. Providentially I fel on the sand and not on the rock. I could not get up. I was lying down on the dry sand in the river for a long time. There were no villages close by. I knew I would not be able to proceed to Kewar. So I decided to return to Junwani. The catechist who was accompanying me left the rest of us in the river and went in search of a donkey or Mule to take me back home. He was unsuccesful in his mission. So my companions lifted me and helped me to climb up to the bank of the river. Resting in many places and supported by my friends we reached Junwani towards the evening. I was screaming with pain. The Sisters came soon and started nursing with some hot fermentation and massage and pain killers. I was able to walk after a week, but I had severe backache. I went on with that pain for three years and finally in 1967, when I was Priest-in -Charge of Kurela, I was then  hospitalized for spinal treatment.

My sister leaves the convent. 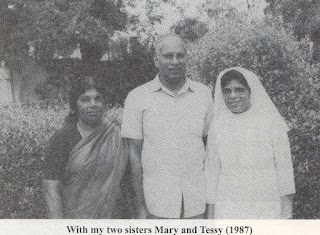 At the time of my ordination my sister mary George was in St.Joseph's Convent, Ranjhi, Jabalpur. She was a trained teacher. Later she was transfered to their convent at Khandwa. Here she decided to give up religious life and leave the convent. Her provincial herself helped her to settle down in Madras. Today she is married and leading a happy family life.

In May 1966 Fr. Paymans was due to go to Holland for his home holidays. Since the Dutch Norberteines were not taking annual holidays they could take six manths or more of home holidays at a time. Usually a senior priest was sent to take over the administration of the station in the absense of the Priest-in-charge. However on the recommendation of Fr. Paymans Bishop Leobard appointed me as the Priest-in-charge of Junwani and he appointed Fr. Lawrence Britto as my assistant. I fulfilled that responsibility to the best of my ability. The people, the staff, the students and the sisters co-operated with me to the maximum. The school teachers, especially Damasus, Anandi, Das, Chintalal and Lalju Singh Marko were a support to me. We continued our mission visit and other pastoral activities as before.

Promotion of tribal culture in the school.

I told the teachers that the condi culture is avery rich culture. We should make our students aware of it and appreciate it. Our teachers were ready to spend extra time to teach the students Gondi dances and songs etc. When they were ready we took them to Jabalpur to perform Gondi cultural dances there. I had recieved all-round help and and collaboration to being the tribal children to Jabalpur and conduct the programme. The dance programme was conducted in the Catholic Gymkhana hall. The hall was packed to capacity. We had invited the principals of our Catholic Schools, some military officials and some important members of the parish. The children looked beautiful in their tribal costumes and expensive ornaments which they borrowed from their homes. They performed very well. When the programme was over, a military community officer requested me to bring the team to the military community hall to perform for the army and their families. The mitary officer sent army vehicles to fetch them, and gave the students lots of presents after the dance programme. Several principals invited them to their schools. Our children did a good job.

We collected donations to buy library books for our school. All the credit for the success of this programme should go to the two teachers of Junwani School, namely Damasus Tirkey and Anandi Das who made painstaking efforts day and night to train the students of our school. Many pupils of our institution had never visited Jabalpur. It was their maiden experience to travel in a train. We took the students around the city and gave them a feeling of the Jabalpur city.


Crossing a flooded River, no problem