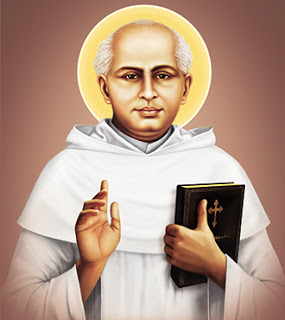 His life-ling desire was to establish a darsanaveedu -House of Vision -i.e; Prayer House, and to begin religious life he inherited from his mentors in his priestly life. Much of what he did, said and wrote was to propagate ideal of religious life. In this short essay intended to highlight some of the central ideals of his spiritual life, I shall touch here only on his thoughts on obedience community life. Since his own words speak for themselves I shall quote from his writings.

Most of his ideas about community life and obedience are found in the two circulars he sent to the members of the congregation. The first was written in collaboration with Leopold of Beccaro 1869, and the second was written by Chavara alone in 1870. Concerning community life we read:

Beloved brothern, the community is not formed by humen device, you yourselves are witnesses that it has been raised, and guided to grouth through the inscrutable providence. Hence persecution and resistance from men cannot destroy this work of God. The only thing that can destroy our community is unfaithfulness to the virtues befitting our vocation, namely humility obedience, charity,religious modesty, true devotion.When we begin only to think of them rather than put them into practice, the monastries will definitely be destroyed in a short time. (IV, p. 90).

After mentioning some of the worldly ways that crept into the newly founded monastries he weeps.

Oh, my beloved brethren, belive it firmly. If you continue to go along this way there will not be these monasteries in twenty years time. This firmness of the monastery is not on the firmness of its walls, but on the virtue and zeal of those who dwell in it. (IV,p.94). Finally, dear children none of us joined the Congregation because of our need or because we could not eke out a life in the secular sphere. It would have been possible for us to enjoy the comforts in the world. Yet we abandoned our riches as well as our parents. Now if we reject God by our negligence or laziness, what a folly or madness it would be. (IV,p.95).

In the letter he sent in 1870 as his testament to the members of the Congregation he dwells on the idea of obedience: The sole mark of a religious is blind obedience, abandoning one's own will completely. One who has obedience is a religious.It is not an easy task. Yet recognizing that our obedience is not yet perfect, we have to try to make it so.(IV,p.99). He exhorts the members to be obedient to the Archbishop, and to the missionaries who will have some authority over the Congregation. Those who have these three levels of obedience will enjoy heavenly bliss here in the monastery itself which is the reflection of heavenly peace on earth. This is certain. (IV,p.100).

Chavara has been known as a pioneer in many fields in the spirituel life of the Syro-Malabarians. Though a founder of a religious community and gave great emphasis to the contemplative tradition of the carmel, a more meaningful tribute to him would be to recognize him as a pastor and missionary. Like his master whose activities were confined within the boundaries if Palestine, Fr.Chavara also had to work with in the limted boundary of central Kerala due to the then existing historical and ecclesiastical situations. When he was ordained in 1829, he chose the biblical verse "the Lord is my portion" as his motto. As a man completely set apart for the Lord, he began to serve his brethren in faith as a solicitous priest. He first consentrated on parish missions. In later years, he directed his confreres to go to parishes in groups., three or four at a time to preach public missions. When he became the first Vicar General of the Syiren catholics he made homelies mandatory during the Sunday Masses. Making use of his official position he effected many healthy reforms in liturgy, introduced unified rubrics for the celebration of the sacred Liturgy in the Syrien rite, and codified the canonical prayers for priests.

Though his field of work was mainly the the Christian parishes, he was was ever concious of his missionary obligation. His first attempt in this line was to inculcate a sense of social justice and human equality amoung people. To give a sense of human dignity to the poor, the illiterate, and non christians belonging to the backward communities, he opened catechumanates attached to the religious houses in the Congregation. There they were taught the fundamentals of faith and were baptized. Fr. Chavara's ardent desire to see the faith spread all over the land was realized only much later in 1962 when the Congregation undertook the preaching of the Good News formly outside kerala in diocese of Chanda.

I have touched on various aspects of the spirituality of Fr. Chavara. A question could be naturally asked at this juncture whether Fr.Chavara had a central vision around which his whole life revolved. The answer is in the affirmative. The core of his spirituality was the discovery of the Lord as his portion. It is in the experiential realization of God concentrating his will on Christ in all apostolic activity and in feeling contact with Christ in an all embracing manner. It is a Christ -contred, Christ oriented discovery of God at an indescribable plane of human conciousness. Christ is all, Christ is in all, (Col. 3:11).This mysticism develops in a poetic imagery and reaches perfection in expression. The beauty of nature transports him to the vision of the foot-prints of God.


The firmament, the sky, the Sun, and the Moon the


Glowing planets and the galaxies of stars
The flora and the flowers flourishing on earth.
Behold the face of the earth and all universes.
Who created these and why ?
That all may grasp thy glory through them.(II,292-298).

The whole creation in asense is a theophany for Chavara. But God experience becomes more genuine a it comes in and through the life of Christ. He intensely desires to see, to touch the various moments in Christ's life.


Make me see the birth in the manger

Some of his objects of vision are physical, some others are spiritual ideals and the desire for a physical contact with jesus makes the poet's vision very lively.

I wish to see the holy person, thy beautiful countenance


We see here the burning desire of Father Chavara to behold Christ face to face even as St.Paul desired. He desired not only to see him but also converse with him always. His prayer is this dialogue itself. This silent dialogue races above all human dialects and expressions and reaches an ineffablestate of exchange of hearts. He says: "Even those who do not share a common language, will speak to each other and understand each other when there is love between them. It is more pleasing to talk to a friend who does not know your language than to a stranger who knows your language. Even if there is no exchange of words, the very act of staying or being close or being close together is satisfying.If I love jesus, then there will be enough matter to converse with him about during maditation. Alternately, even if you can't converse, the realization of being together with him is itself satisfying (III,pp.14-15)

We see the life of Father Chavara an action-oriented mysticism which leaves him with a feeling of being always in the presence of Christ and being enabled to attend to external activities while immersed in the contemplation of the divine presence. It was a life-style patterned after St.Paul who says, "we live, act and have our being in Christ". It was totally different from the life-style of sister Alphonsa, who found fulfilment of life in being a sacrificial victim of suffering and praying for the transformation of all her worldly consolations into bitterness. Though Father Chavara had several moments or periods of mental struggle and agony, he was hardly ever a victim of physical suffering except during his last illness. They, however, are like two flowers, a lily and a rose, blooming in the one apostolic tradition of the church in Malabar, Kerala.

Fr. Chavara is an outstanding memorial of divinity in our midst. He lived a Christ-centred and Christ-oriented life in the midst of strenuous activity, streching out his hands to everything within reach, grasping and guiding them to God. The chorus of the song of his saoul was:"I behold in the solitude of our intimacy the variegated beauty of the lotus of your face"( II,3:56).

For all devotees of Christ, struggling restlessly to dedicate themselves to him, the multifaceted brilliance of Fr.Chavara will be an inspiring sign and manifestation of God's love on earth for man.