Once I learned the dynamics of mission tour, I started going out on my own. There were two boys in the church compound, Indal Das and Prakash Kullu who had passed their middle school exam but did not want to go ahead with their studies.  I found these boys to be of good character, energetic and active. I took them into my team. Both of them followed me whenever I went out visiting people. I slowly trained Indal to be a catechist. Prakash did not want to become a catechist because he was to go back with his family to Chotanagpur from where his father had come to Junwani to work as a catechist. So Prakash took care of preparing meals for the team while we were on tour.

Like Barnabas and Paul, Indal Das and I set out on our missionary journey, but unlike paul's our programmes were of shorter duration. I decided to start my ten days programme from Dumertola where I had my encounter with the police Inspector of Mawai police station. By this time I had become a Hero for the people of Dumertola and the villages arround. They took me for a farless and couragious priest.
Dumertola had a hut made of Bamboos which served as a place of rest for the visiting priest and a chapel for the christian people who come to worship there. As soon as we reached the village a number of villagers gathered to greet us. They remembered our meeting with the police Inspector and narrated the impact it had on the people of the village.

After sending the people away the local catechist Moti Singh, Indal Das and I started visiting houses. First we visited the house of the village head (Mukadam), although in the heart of his heart he hated us, he was polite enough to give me a seat; he offered me a cup of tea and spoke to me very politely. In my conversation with him again I emphasized that in our country every citizen was free to follow the religion of his choice and nobody could object to it. I told the Mukadam that he, being head of the village, was bound to protect the christains of his village and they should not be discriminated against. I was told by the villagers that after my previous visit things had changed in the village for the better.

In the evening and in the morning we had our prayers and meetings with the people. For my night rest the catechist had collected enough of straw. He spread the straw on the floor and prepared a bed for me. The cots that the villagers use were very short and I felt very uncomfortable using them. Hence my bed on the foor. The hut in which I was staying was built on a rocky hillock and there were plenty of poisonous snakes around there. I told the Lord who came down to crush the head of the serpent to take care of me. In Kerala St.George is hounoured as the patron saint against snakes and snakebites. I was taught when I was young that snakes are frightened of St.George because he had killed a snake, a dragon with his lance. I prayed to St. George and slept. I was tired by midnight and I had a good sleep.

No snakes disturbed me at night. In the morning I went to the river Burner which was only about two Kilometers away from the village. I had a wash and bath to my heart's content and came back for the mass and to meet the people.

The second day we went to the twin villages Malumjhola-Dhangaon. We were to camp in the house of an old man who was known as Ghursi Dokhra. Dokhra means an old man. In the winter season, people used to burn coal or firewood in a container to protect themselves against cold. This container with burning firewood was known as Ghursi. Our host was in the habit of using Ghursi in all seasons. Hence he was known as "Ghursi Dokhra". He was a very fine old man, very affectionate and lovable.

This old man had a daughter -in-law and grandson "Lamu" by name. Lamu became very friendly with me. This year I had the chance of visiting this family after 48 years. Ghursi-Dokra and his daughter-in-law were dead and gone. Lamu is a leader in Malumjhola village. He has 5 children and one of his daughters is anun in the JMJ congregation and is presently working in the Girdhi Hospital, Jharkhand.  Dhangaon, Malumjhoa and the sorrounding villages have a strength of about 45 catholic families when I visited the village last year (2011). A piece of land has been bought in Dhangaon village and a chuch built on this property. Hopefully a pries will soon start staying in that village. A tiny plant planted 48 years back is now grown into a big tree. Praise the Lord and thanks to the perseverannce of the faithfull of this area in their faith. 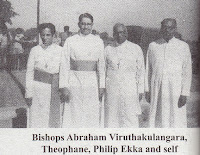 My host Ghursi Dokra made my first visit to the a great event. He gave me his room for my stay but I preferred the open verandah for more fresh air.We had chicken for our dinner and boiled water for drinking so that "Swamiji may not get sick". All this showed their love and devotion for their Guru and Church. No wonder that the Lord called one of his grand daughters to become a religious sister to continue His healing ministry. In this village we conducted the visits, evening prayer and meetings and the programmes in the next morning as in the other villages.//-

ധൃവദീപ്തി  ഓണ്‍ലൈൻ
Dhruwadeepti.blogspot.de
for up-to-dates and FW. link Send Article,
comments and write ups to :
DHRUWADEEPTI ONLINE LITERATURE.
Published from Heidelberg,
Germany,
in accordance with the European charter on freedom of opinion and press.
DISCLAIMER:
Articles published in this online magazine are exclusively the views of the authors.
Neither the editor nor the publisher are responsible or liable for the contents,
objectives or opinions of the articles in any form."