Pope Francis called out the common habit of chatting with people around you before Mass, stressing that this is a time for silent prayer, when we prepare our hearts for an encounter with the Lord. When we go to Mass, maybe we arrive five minutes before, and we start to chit-chat with those in front of us. However, “it is not a moment for chit-chat. It is a moment of silence for preparing ourselves for dialogue, a time for the heart to collect itself in order to prepare for the encounter with Jesus,” he said, adding that “silence is so important.
Continuing his new catechesis on the Eucharist, the Pope recalled his message the week prior, that the Mass is not a show, but a place where we encounter the Lord. In this encounter, he said, silence is what “prepares us and accompanies us." But to really understand this, first we have to answer a question, he said. And that is: What is prayer?
Prayer is first and foremost dialogue, personal relationship with God.  And in prayer, just like in any dialogue, it needs moments of silence “together with Jesus.” This is because it is only in the “mysterious silence of God” that his Word can resound in our heart. To pray is not difficult, and is something that Jesus himself taught us to do first of all by example, when in the Gospels he withdraws to a secluded place to pray. And second, he teaches us again when he tells his disciples that the first word in knowing how to pray is “Father.” This is “so simple,” “So we have to learn, ‘Father.’” Then, we must take on the attitude of a small child before his or her parents. One full of trust and confidence, knowing that God “remembers you and takes care of you."
The second attitude we should take is one of childlike surprise and wonder. The child, always asks a thousand questions because he wants to discover the world; in our relationship with the Lord, in prayer, wonder,” he said, telling pilgrims to “open the heart to wonder.” When it comes to prayer, he noted that often we are busy with many different activities or projects and say we don’t have time. We lose sight of what is fundamental: our life of the heart, our spiritual life, our life of prayer with the Lord. However, Jesus surprises us in truth by loving us and calling us even in our weaknesses, he said, adding that just as Christ called his disciples, he also calls us to him at each Mass. This is therefore the greatest grace: to be able to experience the Mass, the Eucharist. It is the privileged moment to be with Jesus, and through Him with God and his brothers.

All of Mass is Important: Don’t Be Late! 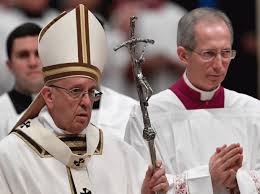 Pope Francis stressed the importance of getting to Mass on time, noting that every piece is important, especially the opening Sign of the Cross, where we prepare as a community to worship God together. It is not a good habit to look and the clock and say: ‘I am in time, I will arrive after the sermon and with this fulfill the commandment." The Mass begins with the Sign of the Cross, with these introductory rites, because we begin to adore God as a community. And for this reason, it is important to plan to not arrive late, but in advance, to prepare the heart for this rite, for this celebration of the community.

Calling it a “symphony” of prayers, the Pope continued his catechesis on the Mass and Eucharist at the general audience, laying out each part of the Mass step-by-step. In the “symphony” of the Mass, “various tones of voices resonate, including times of silence,” he said, “creating a moment of ‘agreement’ between all the participants.” In this way, “the common faith and mutual desire to be with the Lord, and to live unity with the whole community, is expressed.” The purpose of the introductory rites is, as it says in the Roman Missal, to gather the faithful together and “dispose themselves to listen with faith to the word of God and to worthily celebrate the Eucharist."  Beginning by explaining the opening Sign of the Cross, the Pope said that when we mark ourselves it is not only to remember our baptism, but to “affirm that the liturgical prayer is an encounter with God in Christ Jesus, who became incarnate, died on the cross and rose gloriously for us.” As he has encouraged before, Pope asked parents and grandparents to teach their children how to make the Sign of the Cross correctly, while explaining to them how it is a way of invoking the protection of the cross of Jesus. He said that every part of the Mass is important, pointing to even the little elements we might not always notice, like when the priest bows and kisses the altar at the end of the entrance procession, Here the priest makes “a sign of veneration, kisses (the altar) and, when there is incense, incenses it,” because the altar is a figure of Christ, he explained. These gestures, which risk passing unobserved, are very significant, because they express from the beginning that the Mass is a meeting of love with Christ, who ‘offering his body on the cross [...] became altar, victim and priest,’” Francis said.

Importance of Silence in Mass

Pope Francis spoke about the meaning of the “Gloria” and “Opening Prayer,” in which silence is key. During the latter, the priest gathers the intentions of those present to offer them to God. I strongly urge the priests to observe this moment of silence, don't be in a hurry. Let us pray in silence. I urge the priests to do this. During the penitential rite and after the invitation to pray, it helps with concentration; after the reading or homily, it's a call to briefly meditate on what was heard; after communion, it encourages interior prayer of praise and petition.” Pope Francis explained the liturgy is a school of prayer and, thus, suggested a deep awareness of it.

Mass is an Encounter of Love with Christ


The different elements of the Mass, including Liturgy of the Word and the Eucharistic Liturgy, with the introductory rites and the rites of conclusion, form a single body “and cannot be separated,” he said. Nonetheless, the Holy Father said he wanted to explain the various moments, “each one of which is capable of touching and involving a dimension of our humanity.” It is necessary to understand these holy signs,” in order to fully live the Mass and to savour all of its beauty.”

Pope Francis began his catechesis with a consideration of the introductory rites, whose purpose is to ensure that the faithful, gathered together, “might form a community, and that they might dispose themselves to hear with faith the word of God and to celebrate the Eucharist worthily.” It is not  good to arrive at the liturgy late, concerning oneself only with being on time to fulfill the obligation to attend Mass. Rather, we should plan ahead so that we arrive early, in order to prepare our heart for this rite, for this community celebration.

The celebrant then offers a liturgical greeting, to which the people respond, “And with your spirit.” This, the Pope said, is the beginning of “a symphony,” where all those taking part in the liturgy recognize that they are “animated by a single Spirit, and for the same purpose.” This dialogue between priest and people “manifests the mystery of the Church gathered together.” This leads immediately into “a very touching moment,” the penitential act, where all present consider their own sins, but more importantly acknowledge themselves to be sinners. “If the Eucharist truly makes present the Paschal Mystery,” he continued, “the first thing we must do is to recognize what are our situations of death, in order to be able to rise with Him to new life.” This helps us to recognize how important the penitential act is.

Penitential Rite Prepares us for Eucharist

Pope Francis talked about the importance of the penitential rite in preparation for the Holy Eucharist. Pope Francis continued his reflections on the celebration of the Eucharist, focusing on the penitential rite which helps us to prepare our hearts to receive God’s mercy. We acknowledge before God and before our brothers and sisters that we are all sinners, he said. A presumptuous heart, full of its own importance, is incapable of receiving God’s pardon, he continued, just as we know from experience that only by recognising our faults and asking for forgiveness can we pardoned by other people. 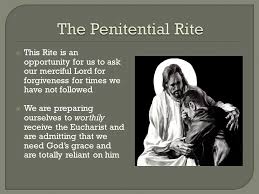 We make our confession as a community, the Pope said, yet each of us speaks personally, striking our breast and recognising that we are unworthy of the gift of God’s mercy. We confess that we have sinned in thought and word and deed, he said, because it is not enough to do no harm to others. Instead, we must choose to do good and bear witness to others that we are disciples of Christ.

Pope Francis said it is hard for us to admit our own shortcomings but we must learn to confess them sincerely instead of accusing others of wrongdoing. After confessing our sins, we ask for the intercession of Our Lady, the angels and all the saints to sustain us on the path to holiness and conversion.